Primarily used to buy items in the Camp Store
“We only take arrowheads here, kid. 100% pure Psitanium arrowheads. Squeezed from the ground like magical pimples popped out of Mother Earth's own back.”

Arrowheads are a unit of currency in Psychonauts. They are refined pieces of Psitanium fashioned in the form of arrowheads and buried beneath Whispering Rock Psychic Summer Camp by the area's previous Native American residents. They also appear in the mental world in the form of psychic arrowheads.

Arrowheads are primarily used to buy items at the Camp Store, the most important of the store's items being the Cobweb Duster which must be purchased to complete Milkman Conspiracy. However, as the Cobweb Duster costs 800 arrowheads, it is strongly recommended to purchase the Dowsing Rod first in order to find Deep Arrowheads, which are worth considerably more than the standard ones.

Arrowheads are used sparingly in other parts of the game, such as during Black Velvetopia to buy the Dog Painters' paintings.

Raz standing near where a standard arrowhead is buried. 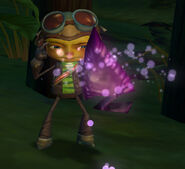 Raz lifting an arrowhead out of the ground. 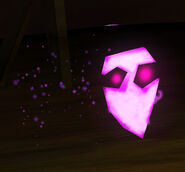 A psychic arrowhead.
Add a photo to this gallery
Retrieved from "https://psychonauts.fandom.com/wiki/Arrowhead?oldid=27187"
Community content is available under CC-BY-SA unless otherwise noted.