Add an additional layer to Raz's Astral Projection
“Your projection into this mind has deepened by one layer!”

Astral Projection Layers are items in Psychonauts which are found throughout the mental world. They restore a layer of Raz's astral projection- the equivalency of an extra life. They appear as a glowing green version Raz's helmet with red-tinted goggles.

Astral Projection Layers can be found in most of the mental world levels of the game. When Raz runs through one of them, he gains an additional "layer"- in other words, a life. If Raz's layer count reaches zero, he is ejected from a mind. If he is already in the real world and he runs out of projection layers, he is teleported to a different location in the real world. 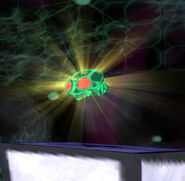 An Astral Projection Layer in Sasha's Shooting Gallery.
Add a photo to this gallery

Retrieved from "https://psychonauts.fandom.com/wiki/Astral_Projection_Layer?oldid=29219"
Community content is available under CC-BY-SA unless otherwise noted.