Golden Helmet
Confusion Ammo Up
“"El Odio imprisons us all. Art is the only escape."”

Black Velvetopia is a Mental World in Psychonauts, taking place inside Edgar Teglee's mind. It resembles a peaceful Spanish city, with fluorescent colors and black backgrounds, as if the whole world is a black velvet painting lit by black lights.

The town is plagued by a colossal pink bull known as El Odio, who runs laps around the streets, threatening to trample anyone who stays on the road for too long and trapping many in side alleys.

Upon entering Edgar's mind, Razputin Aquato lands in a clearing where Edgar tries to build a stack of cards to reach Lampita Pasionado, a beautiful lady inside the sun on the top of the sky, and crying rose petals. The problem is that a gigantic pink bull called El Odio knocks his tower down time and time again. Raz states that Edgar is missing his queen cards and goes to search for them. Throughout the level, Raz encounters the Dog Painters who help Raz by selling him their paintings, which can come to life and allow him to reach new areas. Razputin has to make his way through the city and its sewers (which bear an uncanny resemblance to high school locker rooms -- black light bulbs can actually be seen on its ceiling), and every so often finds a portal that leads to a wrestling arena. In each one of these arenas, Razputin battles a large wrestler, four in all, each of whom guards one of Edgar's coveted queens. Along the way, he also meets Dingo Inflagrante, the best bullfighter in town, who wants an advertisement mural painted before he will fight El Odio. Dingo then gives Raz a Confusion power, which is required to beat the last wrestler and complete the set of queens, as well as to ensure that advertisement painting is complete.

After Raz gives Edgar all of his cards, he enters an arena and must fight El Odio. After weakening him, the matador Dingo Inflagrante appears and it is revealed that El Odio is actually a representation of Edgar and his obsessive hatred for people he knew in high school: Lana Panzoni and Dean LaGrante, represented by Lampita and Dingo respectively. Raz must now protect Edgar from the matador, at the same time defeating him, so that Edgar can be freed from his obsession.

After the battle, Edgar realizes it was foolish of him to have lingered so long on his past, and he is cured of his mental problems. He can later be found in the clearing where his card tower once stood, playing poker with the Dog Painters. El Odio is nowhere to be seen. 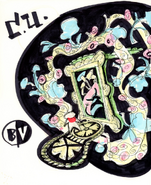 Concept art for the locker room

Concept art for a fountain.

The end of the street.

A part of the main street. 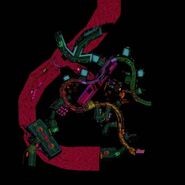 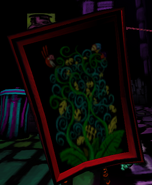 Houses in the distance.

Dragon's fountain.
Add a photo to this gallery

Retrieved from "https://psychonauts.fandom.com/wiki/Black_Velvetopia?oldid=29500"
Community content is available under CC-BY-SA unless otherwise noted.