Green
“You know, Earthling violence is why we haven't been asked to join the greater galactic community.”

Chloe Barge is a 7 year old camper at Whispering Rock Psychic Summer Camp in Psychonauts. She is convinced she comes from another planet, and spends most of the game trying to contact her kind in outer space. Because she is busy with this, she seems uninterested by most "earthling" attempts to communicate verbally. Her interests revolve around space and hardcore rap.

She is voiced by Brett Walter.

Most of the time, Chloe is hard to spot at camp as she continually tries to be as high up (and thus as close to outer space) as possible.

She can be seen flying a model airplane on top of a hill in the wilderness near the GPC, claiming she is not having fun but running crucial flight tests. Later, she tries to extend the reach of the Main Lodge's antenna to be able to send messages past the Earth's moon.

Bobby Zilch obviously has a crush on her (regardless of the helmet), and at one point chases off Nils trying to make a move on her. She remains clearly unimpressed, stating she needs to work on Bobby. According to the extra content on the Double Fine website, she eventually agrees to go out with Bobby in exchange for his not bullying anyone anymore.

After being rebrained, Chloe seems to be the first person to want to help Razputin out by using the Coach's radio to try and get outside help. When Raz then talks to her at Oleander's classroom, however, she confesses she was only trying to contact her fellow extraterrestrials to get her off the doomed planet.

Another concept art for Chloe. 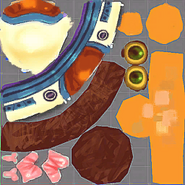 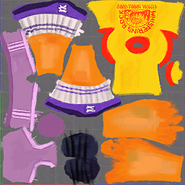 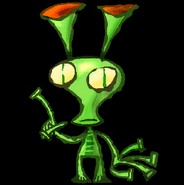 Using clairvoyance on Chloe
Add a photo to this gallery
Retrieved from "https://psychonauts.fandom.com/wiki/Chloe_Barge?oldid=14895"
Community content is available under CC-BY-SA unless otherwise noted.