5
“Son, do you realize that to take my course I will have to pull you into my mind... And you will have to relive every bullet-scarred memory of every battle I have ever faced? It won't be pretty.”

Coach Oleander's Basic Braining is a level featured in Psychonauts. It takes place within the mental world inside Coach Oleander's mind, and is a military-themed obstacle course through which Oleander shows the PSI Cadets the basics of maneuvering through mindscapes.

The obstacle course is created by Coach Oleander based on his (fabricated) war memories, and as such features several military-based settings and motifs. Subtle cues in the environment, however, represent a leak of his true psyche and foreshadow the true root of his trauma.

At the end of the course is a podium where campers who complete the course would be congratulated by Oleander. However, Oleander did not expect any of the campers to actually complete the course, and left part of the final room unprotected, resulting in a leak in his psyche which manifests as the "white room".

Coach Oleander hosts his obstacle course right next to the Kids' Cabins, and it is the first class given to the campers of Whispering Rock Psychic Summer Camp as well as the first mindscape encountered by Raz. Oleander uses the Psycho-Portal to teleport the campers' astral projections into the course.

“It's a recruiting office, kids, and I'm here to recruit you for the greatest job in the world. Being a Psychonaut.”

The level begins in a small recruitment office with a desk, projector, flags, and recruitment posters. Here, Raz and Elton Fir are briefed by a projection of Coach Oleander about the upcoming course. He then instructs Raz to "sock [him] square in the jaw" in order to begin. Raz must use his PSI-Punch melee attack to destroy the wall of the recruitment office, revealing the course. Elton then begins to charge onto the course but is exploded by an overhead bomber jet, which Raz interprets as him being killed and remarks on how dangerous of an obstacle course it is. Oleander responds that he didn't die but rather had his astral projection ejected from the mindscape. After this point, the recruitment office disappears and is replaced by the exploded hull of a fighter jet.

The Trenches area begins with a simple platforming section wherein trenches are formed from overhead bomber jets, which Raz must then jump over. The area is littered with military symbols: giant bowie knives, barbed wire, "plants" modeled after ammunition clips, dog tags, and military badges, giant dog tags labeled "Oleander", skulls with military helmets, tires, burning oil drums, naval mines, and projected footage based on World Wars I and II. Even the sky is modeled after military-style camo . While traversing the area, intermittent explosions from overhead bomber jets occur on the field, and fires rage amidst crashed planes.

After jumping over the initial trenches, Raz encounters his first Figment and Emotional Baggage, both of which are explained by Oleander. Raz then climbs a ladder leading up to a watchtower before climbing up a concrete tower via two pickelhaube-topped poles. He must then descend the other side of the tower, which is embedded with flamethrowers.

Upon reaching the platform at the bottom of the tower, Raz encounters Bobby Zilch, who is confused about how to get past a giant, flame-throwing rocket obstacle. Raz says there must be a "more advanced route", which Bobby is offended by, and kicks Raz off of the platform. Lili Zanotto saves Raz from hitting the ground by using Levitation, but says she was only doing it to protect a strange meat-plant growing out of the field, which she is attempting to communicate with using Herbaphony. She remarks that she's seen one just like it in a recurring nightmare she's been having before levitating Raz back up to the platform.

Raz then has two options to get past the rocket- he can either take a "classified route" through an underground area reminiscent of a bunker, or simply climb up the ladder attached to the platform opposite to the rocket. Using the classified route allows him to skip the next area, which is two platform-carrying blimps flying over a city while two fighter jets reign fire on it.

The next area involves climbing around a giant, Oleander-shaped bunker cannon. He must sidle across the ledge beneath the bunker's cannons, which Vernon Tripe is shown doing before being blown off it. At the top of the bunker cannon is a large tower with a net hung over the side which Raz must then climb. Benny Fideleo is seen climbing it, who first taunts Raz before crying out in fear for Bobby and is then blown up.

At the top of the wall is a minefield, which Dogen Boole is standing in front of, cowering in fear. Raz has the option of guiding Dogen across the minefield in exchange for arrowheads or may simply traverse the minefield alone. Triggering a mine results in Raz being teleported back to the beginning of the minefield.

Raz must then climb another flagpole to raise a flag with Oleander's face on it. This opens the "mouth" of a giant entrance based on Oleander's face.

Past the entrance is the interior of a flaming plane about to crash, where Vernon can be found. Vernon tells an endless story about a time he took his dog Lady for a walk. Raz must melee the door of the plane and jump out of it, which results in Vernon being sucked out of the plane as well.

Raz falls out of the plane into the middle of a whac-a-mole minigame inside a prison camp-styled enclosure, where Crystal Snagrash and Clem Foote are located. Unlike the trenches, the ground in this area is covered in snow while snowflakes fall from a blue-colored sky. They say they're unable to complete the game and ask Raz to do it, cheering him on by shouting "PUNCH!" repeatedly. After completing the minigame, Oleander ejects Crystal and Clem for their obnoxious cheering and opens the gate to the next area. Past the gate Raz encounters his first Memory Vault- Oleander's Pride, and Oatmeal the PSI-Popper Generator. Oleander explains what memory vaults are, saying he has "nothing to hide". Raz then melees a giant soldier cutout to reach the next area.

This area features a large bunker cannon with a minigun amidst a snow-covered forest, and a large swath of land which Raz must cover while the minigun fires at him. To do this he must punch and run between areas of cover. Throughout the area are bunnies clad in military hats- seemingly out of place at first but actually a leak of Oleander's true psyche. Once Raz reaches the cannon and climbs atop it, Bobby Zilch climbs out of it, revealing that he was the one shooting at Raz. Raz jumps into the cannon and enters another area with a flagpole, which he climbs to open another Oleander-shaped entrance. He rides a red-colored tunnel and exits at the next area.

This area features a red and orange sky, a large battleship and tall walls made out of ship hulls which Raz must scale by different means. After reaching the top of the first wall, he encounters a Mental Cobweb, which Oleander explains and says he will need the Cobweb Duster to get rid of them. After scaling the second hull via tightropes, he reaches the trapeze area.

The Trapezes and The Rail

The area begins with a series of trapezes attached to stationary fighter planes. Chops , Elka Doom , and J. T. Hoofburger are shown attempting to use the trapezes together, but fall below while Oleander remarks how difficult they are. As Raz is an acrobat, they prove no challenge to him, and he clears them with ease. He then glides down a rail, on which Bobby Zilch is waiting for him. Raz melees Bobby, knocking him into the water below, and imitates Bobby's victory dance. He slides into another Oleander-shaped entrance with jagged teeth to the final area.

The Rolling Tunnel of Logs

The rolling tunnel of logs is the final obstacle of the course. It is a series of half-logs embedded with nails which rotate around a cylindrical chamber of jagged points, like a meat grinder. Oleander taunts Raz, saying there's no way he'll be able to complete the obstacle. Raz must tread carefully across the logs before sliding down a rail to the course's finale.

Finale and the White Room

The final room features a large stage, surrounded by giant weaponry shown in other stages of the level and illuminated by a single spotlight. Raz approaches the stage but Oleander is not there to greet him, believing no-one would complete the course. Raz finds a door in the wall of the room that's left open, leading into a white, hallway-shaped room. The room's walls have a trim with a pattern showing bunnies and carrots, and at the end of the hallway is something concealed behind a red curtain. Raz approaches the curtain and prepares to see what is behind it, which appears to be a blueprint, but Oleander stops him and levitates him back to the stage. He then presents Raz with his first Merit Badge and ejects him from his mind.

After leaving Basic Braining, Raz is stopped by Bobby and Benny, who attempt to intimidate him before Sasha Nein appears and remarks on Raz's outstanding performance before telling him to report to his lab for "advanced training". He gives him a button and a hint on where to find his underground lab. 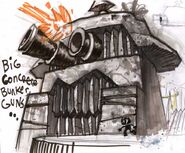 Storyboard for the end cutscene 1.

Storyboard for the end cutscene 2.

Storyboard for the end cutscene 3.

Storyboard for the end cutscene 4. 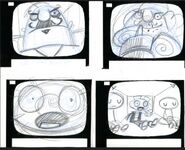 Storyboard for the end cutscene 5.

Storyboard for the end cutscene 6.

Storyboard for the end cutscene 7.

Dialogue lines.
Add a photo to this gallery 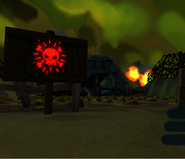 A skull and crossbones sign next to the minefield. 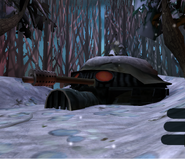 A top down view of the mental world.

Lili preventing Raz from landing on a strange plant.

The dentist office at the beggining of the level.

A levitation ball inside the dentists office.

Raz standing in the hidden hallway.

The platforms.
Add a photo to this gallery
Retrieved from "https://psychonauts.fandom.com/wiki/Coach_Oleander%27s_Basic_Braining?oldid=30795"
Community content is available under CC-BY-SA unless otherwise noted.