Psychonauts (Cameo)
“The original protagonist of the game. Other than the ‘primal memories’ concept art reels, Dart appears only once in the game. During the final cut-scene, he peaks out from inside the outhouse between the parking area and the main lodge.”

D'artagnan, or Dart for short, was the original protagonist concept planned for Psychonauts. The main character was changed during development to Razputin, due to difficulties with animating Dart's hat. They also feared that the sway of the hat would be confused with a ponytail and people would think Dart was female.

He makes an appearance for a split second during the final cinematic, peeking out from inside an outhouse in the background. It is unknown if he is a Whispering Rock camper.

D'Artagnan wears a green striped sleeping cap, a blue jacket, brown trousers, beige stockings, and brown shoes. He also wears a backpack. His skin is blue, his eyes are orange, and his hair color is unknown.

Profile and back views of Dart

Some more concept deigns for D'art

Flat-color image of Dart, with his backpack

Sketch of Dart in Gloria's Theater

Another sketch of Dart in Basic Braining

Dart, gigantic, looming over a concept of Lungfishopolis

Another page of the redesign, also labeled "D'artagan" 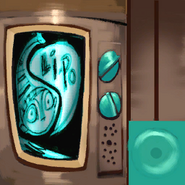 Texture sheet for Dart on a television screen in Ford's Sanctuary. 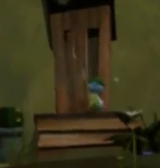 Dart spotted in the game's ending
Community content is available under CC-BY-SA unless otherwise noted.