Psychonauts in the Rhombus of Ruin (as a figment)

Nika Futterman
“One time, I made someone's head explode. Actually, it happened four times. Now they make me wear this special hat, so I don't have any more accidents.”

–Dogen to Raz during the opening of Psychonauts

Dogen Boole is a PSI Cadet at Whispering Rock featured in Psychonauts. Due to his difficulty controlling his lethal abilities, his parents have him wear a "special hat" which allegedly keeps his powers under control.

Dogen wears a red onesie with a tinfoil hat and a yellow scarf. He has bluish-green skin, brown eyelids, yellow scleras and brown eyes. He is very short.

“Simple on the surface, but deep down inside, he is also simple. But kind. Dogen has a very powerful brain. So powerful, in fact, that he has to wear a psychoisolation hat to keep his powerful psychic emanations to himself”

Dogen is a calm, shy, and friendly boy and a bit air-headed at times. His outfit consists of red footie pajamas with a yellow Whispering Rock handkerchief around his neck, as well as a specialized tinfoil hat his parents make him wear so he doesn't accidentally blow up any heads with his immense psychic power—power Dogen has been taught to fear.

Dogen is one of several children present at Coach Oleander's camp meeting, which is interrupted by Razputin. He is shown to be easily frightened when he mistakes Raz for the Lake Monster, and has difficulty making it through the minefield in Basic Braining. If Raz helps Dogen through the minefield, he gives Raz some arrowheads even before it is explained what they are as a thanks.

When Razputin first talks to Dogen in person, the little boy is having an argument with some squirrels, claiming they are lying and telling him he will kill everyone. He threatens them, and as Razputin heads to class, Dogen feigns innocence before squirrel parts rain down around him.

After returning his brain, Dogen will remark that he had better apologize to the squirrels for not believing them, as they had been telling him that "A little man would kill everyone," which he had taken to mean himself. He can later be found at the Kids' Cabins, apologizing to the squirrels.

Blastokinesis is Dogen's signature ability. It allows him to make other being's heads explode and is hard for him to control, as he has taken a few lives with it before. His hat allegedly helps him from accidentally using it, but he is shown using it to detonate the squirrels he is talking to before Basic Braining.

Dogen seems to be capable of telepathic communication, as he uses this ability to communicate with the squirrels of Whispering Rock and is adamant about them being "liars" until being rebrained. He's seen doing this before Basic Braining and after being rebrained.

Used while playing hide and seek with Vernon, Elka, and Milka after Brain Tumbler Experiment.

Dogen has the ability to communicate with the squirrels around the camp. 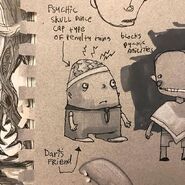 First ever sketch of Dogen by Scott C. 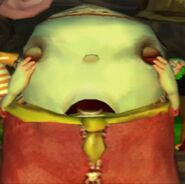 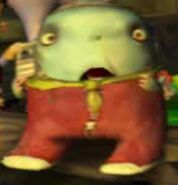 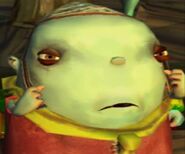 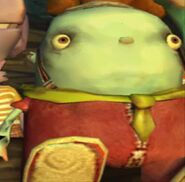 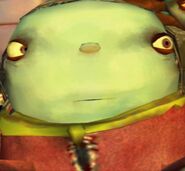 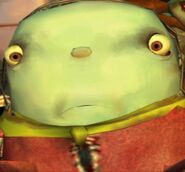 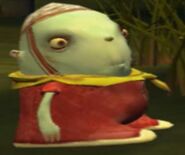 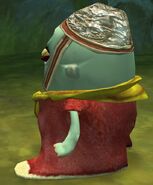 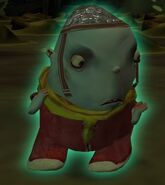 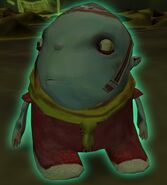 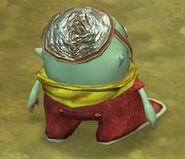 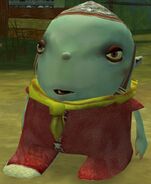 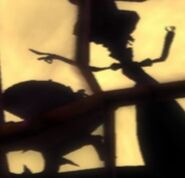 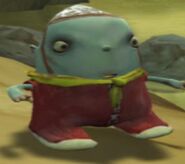 Closeup of Dogen's ear after he's been de-brained. You can see through his head. 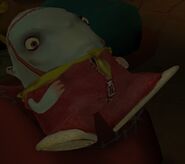 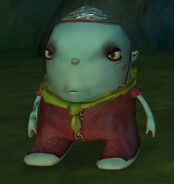 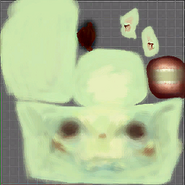 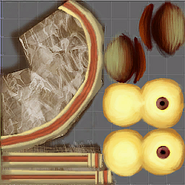 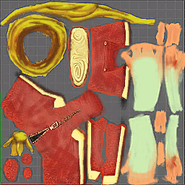 texture sheet
Add a photo to this gallery 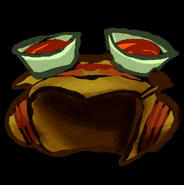 Using clairvoyance on Dogen
Add a photo to this gallery 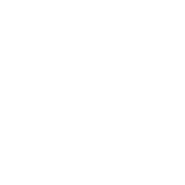 Figment of Dogen in the main menu of Rhombus of Ruin.
Add a photo to this gallery

Dogen in an official Doublefine Christmas Card from 2005 by Razmig Mavlian.
Add a photo to this gallery
Retrieved from "https://psychonauts.fandom.com/wiki/Dogen_Boole?oldid=28671"
Community content is available under CC-BY-SA unless otherwise noted.