Psychonauts in the Rhombus of Ruin (Mentioned by Raz)

Jerry De Capua
“Hm. What is this? Are you working on an abstract piece? Nice use of color...”

Edgar Teglee is an artist and resident of the Asylum. He suffers from random bursts of rage and is obsessed with bull fights.

Edgar is a very muscular man who enjoys creating art. He has four fingers on each hand, purple skin, violet eyes, black hair with grey stripes running through, and various dragon tattoos on his arms and back. He wears a black vest with animal designs reminiscent of Mexican art culture with matching shoes. The vest has a green snake, a red bull, yellow wings, and rose flowers woven on top. He additionally wears a striped red and white shirt underneath the vest with matching pants supported by a large black belt with a golden buckle. There is a paintbrush etched on top of the belt buckle. His eye bags and nose are a dark pink color and his ears are not visible under his hair.

“Locked away in the Asylum's art therapy room, Edgar toils over his work. All day, every day, he paints bullfights on black velvet. He can paint nothing else. He is a man obsessed; a prisoner of Art.”

At first, Edgar tells Raz that he was once a famous painter and husband to the beautiful Lampita Pasionado. One day, Edgar was approached by the famous bullfighter, Dingo Inflagrante, who commissioned Edgar to paint a portrait of him. As time went on, however, Lampita ended up getting seduced by Dingo and ultimately left Edgar to be with him. Edgar was devastated by this and was driven mad with heartbreak, painting nothing but bullfights to symbolize his anguish.

A sad tale indeed, but a romanticized version of what really happened in the real world. The true story is that Edgar was the captain of his high school wrestling team. He and his teammates all based their costumes on different animals, with Edgar's being "The Bull". Edgar's talents as a wrestler were able to get his team a chance at the state semi-finals, but it was then that his cheerleader girlfriend, Lana Panzoni, left him for a male cheerleader, Dean LaGrante. The devastation Edgar felt broke his fighting spirit. He lost his next wrestling match, costing his team a chance at the championship. His teammates all turned their backs on him for it, further compounding his sadness. Edgar spent much of his time painting in the art teacher's room to hide away from his former teammates. He was eventually sent to the Asylum, when his obsession with bullfights led him into fits of rage.

Raz finds Edgar inside a room full of painting equipment, chained to the ground by his leg. He paints velvet paintings and attempts to paint Dr. Loboto's face, which is required for him to be set free, but every time he tries to finish a painting, he ends up painting a bullfight over it.

Raz helps him by entering his mind. Here, in the mental world of Black Velvetopia, he finds Edgar attempting to build a house of cards to reach the sun. In the sun is a woman crying rose petal tears. Edgar explains that he is trying to build the house of cards to reach her, but two things have gotten in the way of that. First, Edgar doesn't seem to have a full deck, meaning that he doesn't have enough cards to reach the woman. Second, Edgar reveals that his tower keeps getting knocked down by a large pink charging bull known as El Odio.

Raz points out that Edgar is missing his Queens, and offers to go find them. Raz is then swept into the streets of Edgar's mind by El Odio. After finding the cards, Raz gives them to Edgar, who uses them to finish the house of cards and reach the sun. Raz follows Edgar up the house of cards, and then finds himself in a bullfighting ring with El Odio, who is revealed to be Edgar himself. Raz fights against Edgar and defeats him, whereupon Dingo shows up to finish Edgar off. Raz tries to reveal that everything in Edgar's mind wasn't real, that Edgar made up El Odio, Dingo, and Lampita, the last two being romanticized versions of Dean and Lana. However, Edgar is too angry to listen, and turns back into El Odio, charging at Dean/Dingo, who simply parries him. Raz takes Dean/Dingo on himself, and defeats him, causing Lana/Lampita to run to Dean/Dingo crying. Seeing this, Raz's sorrow turns to disgust as he instantly says they are pathetic.

Finally, Edgar is able to see Dingo and Lampita for whom they really are, and decides not to obsess over what Dean and Lana did to him any longer, removing the thing that caused him to go insane: the trauma stemming from his high school memories. After that, he gives Raz the painting of Dr. Loboto and begins painting a new one.

After the player removes Loboto, Edgar decides to leave and frees himself. When he breaks off the chain, connected to the floor, he accidentally breaks a gas pipe. At first, he's worried, but after sniffing the air, realizes that there is no gas. After spilling all his turpentine and acetone on the ground he leaves his room, Gloria turns on the gas and Fred opens a window leading into the area that has the elevator and Edgar's room. Boyd tosses his lit bottle into the area and the gas ignites, blowing up the Asylum. Like the other asylum inmates, he leaves Thorney Towers and never returns.

Edgar is friends with Boyd. They escape with the remaining inmates from Thorney Towers before it's destroyed. The full extend of their relationship is up to speculation.

Edgar is friends with Gloria. They escape with the remaining inmates from Thorney Towers before it's destroyed. The full extend of their relationship is up to speculation.

Edgar is friends with Raz and appreciates his help with assembling the card tower. If clairvoyance is used on Edgar, Raz will appear as a poker card.

Edgar is friends with Fred. They escape with the remaining inmates from Thorney Towers before it's destroyed.

Edgar is good friends with the dog painters and can be found playing poker with them if Raz returns to Black Velvetopia after it is completed.

Dingo Inflagrante is Edgar's enemy and a primary source of rage and torment inside his mind. He represents the man that stole the love of his life in high school.

Lampita was Edgar's love interest in high school. He was heartbroken when she left him for another wrestler which subsequently caused him to be admitted to the insane asylum, Thorney Towers. Inside his mind, she is primary source of yearning, rage, and discomfort.

Edgar deeply resents the bull that runs rampant in his mind, representing his anger issues. However, Edgar and El Odio are sometimes the same entity which additionally represent Edgar's self loathing.

Cispin is Edgar's fellow asylum inmate. They do not interact directly within the game, therefore their true relationship is up to speculation. 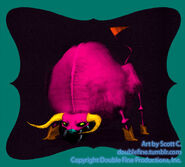 The Bull, concept in color.

Concept art of El Odio.
Add a photo to this gallery 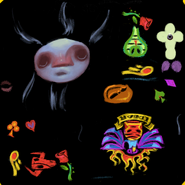 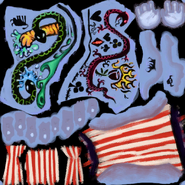 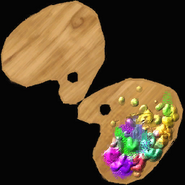 Edgar's talksprite as the bull.
Add a photo to this gallery
Retrieved from "https://psychonauts.fandom.com/wiki/Edgar_Teglee?oldid=24427"
Community content is available under CC-BY-SA unless otherwise noted.