–When using Bacon near one of Ford's alter egos

“Janitor, Admiral, Ranger, Chef, and more, Ford is the man behind the scenes at Whispering Rock Psychic Summer Camp. He keeps it running smoothly, knows all the shortcuts, and somehow manages to be everywhere in camp at once, including a few secret spots where Raz discovers there’s more to Ford than his brooms.”

Ford Cruller is a Psychonaut agent and the "greatest leader" they've ever had, according to Raz. He used to be one of the powerful Psychonauts ever, but because of his advanced age and Split Personality, he's now limited to the role of a dispatcher. He is stationed near a Psitanium deposit beneath Whispering Rock Psychic Summer Camp, which he is unable to leave without relapsing into one of his alter egos. Around camp, no one but Sasha Nein, Coach Oleander, and Milla Vodello know he is a Psychonaut, including Ford himself as he forgets who he is when he's not around his Psitanium compound.

Several years ago before the events of Psychonauts, Ford was locked in mental battle with a very powerful psychic. He managed to defeat his opponent, but the ordeal left his psyche heavily fractured. Literally fractured. Unless Ford stayed near the Psitanium mother lode deposit (the power of which pulls his mind together), his mind would split off into a number of other identities, leaving him with no memory of who he truly is.

Although Ford tried to remain underground in his sanctuary as much as possible to continue scouting for Psychonaut business, the operational branch of the Psychonauts largely wrote him off as a mentally-damaged has-been several years before the events of Psychonauts even start. This forced him to secretly give the assignments he came up with to Sasha Nein and Milla Vodello, the only agents who still respected him as a competent psychomaster.

Ford has a large network in his sanctuary where he is able to see where psychic trouble is occurring around the world. He would relay the information to Sasha and Milla, who carried out the missions. They kept the fact that their missions came from Ford a secret, knowing that if the Psychonauts found out that Ford gave them all their assignments, they would stop approving them.

Cruller first appears in Razputin's dream when he falls asleep in the bunk at the beginning of the game. He instructs Raz about PSI Challenge Markers, PSI Cards, and PSI Cores before disappearing and Raz remarks that he "looked so familiar…"

Throughout the game, Ford and his alter egos can be found all throughout Whispering Rock.

His janitor persona first appears before Basic Braining, blocking the bridge from the Kids' Cabins to the Main Campgrounds. After completing Basic Braining, he can be found next to his trailer home in the Reception Area.

His ranger persona is first encountered when Raz first enters the Main Campgrounds. He gives Raz the Scavenger Hunt before disappearing. After that he can be found near the Geodesic Psychoisolation Chambers raking leaves, where Raz can redeem the Scavenger Hunt for PSI Cadet ranks.

His chef persona can be found in the Main Lodge, running the Camp Store while cooking burgers (which are not available, due to the charcoals being on "back order"). The store sells many useful items, such as the Cobweb Duster (necessary to traverse later levels) and PSI Cores (which are used to make PSI Challenge Markers). He also broadcasts advertisements for the store via the camp's intercom.

His "admiral" persona can be found in the boathouse in the Boathouse and Beach area. He oversees the camp's boats and tells Razputin that he cannot use a canoe without first receiving the Oarsman's Badge.

"Mr. Cruller", the camp janitor who lives in a trailer in the Reception Area.

"Admiral Cruller", overseer of Whispering Rock's boathouse in the Boathouse and Beach area.
Add a photo to this gallery

Upon reaching Ford's Sanctuary, Raz meets Ford's true self: Psychonaut Agent Ford Cruller. His purpose is to keep watch over Whispering Rock and all of its campers while also observing a global network for signs of psychic terrorism and dispatching other Psychonauts to the scene. When asked about his alter egos, he initially tells Raz that they are his "disguises" to hide the truth about his mental fractioning. Ford loves bacon, and gives Raz a strip of bacon which he can use anywhere to contact him. He can teleport Raz to his sanctuary (and back to the area he was in), tell him about enemies, and remind him of what he needs to be doing. When Raz earns certain Merit Badges (Pyrokinesis, Telekinesis, and Invisibility), Ford will appear to instruct him how to use them. Furthermore, if Raz has bought the PSI Energy Colorizer from the Camp Store, he can ask Ford to change his thought bubble's color for him.

After completing the Brain Tumbler Experiment and talking to Lili down at the docks, Ford calls Raz to his sanctuary to reveal that he's collected all of the brainless campers and gathered them in the observation room of his sanctuary. He then divulges the real reason he can't leave the Psitanium deposit and asks Raz to save the campers as he is unable to contact Milla or Sasha. Raz can then bring the camper's recovered brains to his sanctuary to "re-brain" them.

At the end of the game, Ford appears outside of his sanctuary (with a wad of Psitanium strapped to his back to retain his mind) in order to declare Razputin an official Psychonaut. After it's revealed that Truman Zanatto has been kidnapped, Sasha asks Ford to teleport them to headquarters, but Ford has relapsed into his chef persona. Sasha, Raz, Milla, Oleander and Lili embark for headquarters via jet, leaving Ford at Whispering Rock.

Ford Cruller will appear in Psychonauts 2. Based on a painting made by artist Scott C, one of his alter egos will be a bowler, and another a barber. There is a level in Psychonauts 2 that has a large mechanical humanoid figure that resembles Ford Cruller, but it is unconfirmed whether this is a part of his mind or not.

Concept art of "chef" Cruller at the grill.

Concept art of Cruller's true self.

Another concept art of "Ford Bowler" for Psychonauts 2. 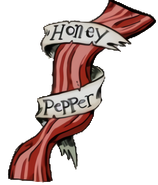 Render of Cruller in his janitor persona. 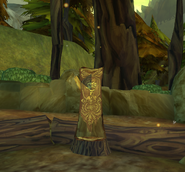 Ford Cruller's name stake in-game, showing that the name plaque is broken off.

Ford coming out of Raz's ear after being summoned by bacon.

Ford coming out of Raz's ear in the Psychonauts 2 trailer.

Ford outside of his sanctuary with Psitanium strapped to his back. 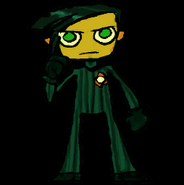 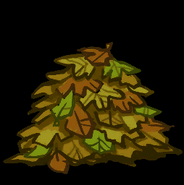 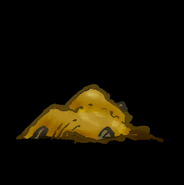 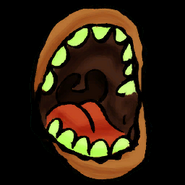 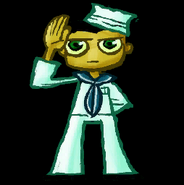 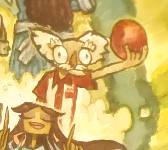 Ford holding a bowling ball in a painting made by Scott C.

Ford wearing his psitanium backpack.
Add a photo to this gallery 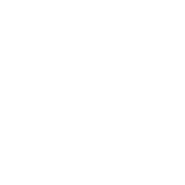 Figment of Ford in the main menu of Rhombus of Ruin.
Add a photo to this gallery

Ford looking at himself in a broken mirror.

A picture of a young Ford from the first Psychonauts 2 trailer.
Add a photo to this gallery

Retrieved from "https://psychonauts.fandom.com/wiki/Ford_Cruller?oldid=28759"
Community content is available under CC-BY-SA unless otherwise noted.