Andre Sogliuzzo
“Sacré bleu! I have been hit!”

Fred Bonaparte is a direct descendant of French general Napoleon Bonaparte, and a former Orderly and resident at Thorney Towers Home for the Disturbed in Psychonauts.

“An actual descendant of the real Napoleon Bonaparte, Fred led a normal life, free of war, empire building and funny hats. Fred was very docile. In fact, he was what you might call a loser. Somewhere deep within him though, the spirit of Napoleon lay dormant. Then one day, disgusted with Fred's un-killer instinct, the spirit of Napoleon woke up. He took over and began fighting a war for control of Fred's mind.”

Fred was once chief orderly at Thorney Towers Home for the Disturbed. He took an interest in the withdrawn inmate Crispin Whytehead, making it his mission to get Crispin to communicate with other people. He decided to use play therapy to do so, using a board game known as Waterloo-O. The therapy seemed to work all too well, however; while it did allow Crispin to come out of his shell, he proved to be devastatingly good at the game. Fred lost a humiliating 27 times in a row, causing the genetic memory of his ancestor Napoleon Bonaparte (who was sick of seeing his descendant lose to a "feeble-minded invalid") to awaken inside him and take control. From then on, Fred was forced to play the same board game again and again until he could win against Napoleon and prove himself at least a bit worthy of the family name after all.

Fred is a rather tall, lanky person. He’s trapped in a brown and white straight jacket that keeps both arms at his side. He has a single cup mounted on each shoulder, (Left is a blue mug, right is a pink teacup) both made to mimic epaulets. Along with the cups is a big pine green hat atop his head with a yellowish trim around the edges, made to look like Napoleon’s famous hat. A single flower pot is embedded into the top-right of the hat with a bright red rose growing out, mimicking a feather. Fred also sports two towels on his back, (left orange, right pink), both put together to look like a cape. He wears long, pale green pants decorated with lines of dirt starting from the bottom, heading upwards and ending halfway. He also wears two mismatched flipflops with white socks, left red, right green.

When Razputin enters the Asylum's lower floors, he immediately hears Fred shouting about losing his battle, and Crispin telling him to be quiet. He quickly learns Fred believes himself to be Napoleon, and decides to help him out of his delusions.

With Razputin's help, Napoleon is defeated, leaving Fred sane once more. Razputin helps him out of the straitjacket that bound his arms for so long, and he vows to go and strangle Crispin for what he put him through. But not before taking a refreshing nap, without ancestors to bother him.

Later on, when Raz uses the elevator to get up to the upper floors of the Asylum, Fred confronts Crispin and chases him out of the room (it is unknown if any strangling or violence actually took place). Fred regains his position as Chief Orderly after the absence of Whytehead. If Razputin later returns to the Lower Floors, Fred will be back where he was before, playing his makeshift board game, but this time because he finds it fun and wants to "run a few new strategies through his head." He also seems to have permanently inherited Napoleon's proud, upright way of walking.

Right before the destruction of the Asylum, Fred jumps out of a window to his freedom, and meets up with the other inmates who cease their escape when being spotted by Fred who is orderly once again. He tells everyone that the asylum is closed and that they can go home. His comment to Boyd triggers a reaction, making him throw his Molotov milk bottle into the courtyard and wrecking Thorney Towers in a fiery explosion.

An original concept for Fred.

Original Concept art of Fred looking out at his kingdom.
Add a photo to this gallery 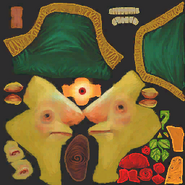 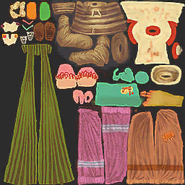 Texture sheet of Fred's body.
Add a photo to this gallery

Talksprite
Add a photo to this gallery

Fred, alongside Raz.
Add a photo to this gallery
Retrieved from "https://psychonauts.fandom.com/wiki/Fred_Bonaparte?oldid=29049"
Community content is available under CC-BY-SA unless otherwise noted.