“Listen, the burden of being the only sunshine in this theater is just too much for one beautiful, glowing, inspirational muse to bear you know?”

Gloria's Theater is the mental world set in Gloria Von Gouton's mind in Psychonauts. Gloria's mental realm is (as its name suggests) a large, dark theater where horribly acted plays of episodes of Gloria's life are played out repeatedly under the watchful eye of Jasper Rolls, the resident critic.

Entering into fallen actress Gloria's mind through the Psycho-Portal, Razputin is transported to her inner theater, and immediately gets asked to get off the stage by Becky, the stressed-out stagehand. When she exclaims her play is ruined because of Raz's confused reaction, a morbidly obese man in the audience points out it was already a horrible play anyway. The man turns out to be Jasper Rolls, Gloria's inner critic. He is a cynical jerk who likes nothing more than ridiculing other people's work, but Becky has bigger problems at the time: Bonita Soleil, the star of the show and Gloria's muse, has locked herself into her dressing room and refuses to come out. Loud sobbing can be heard all the way to the back of the corridor as well. Using Invisibility, Raz decides to help out by infiltrating Bonita's room, where he finds Bonita in tears. However, when he talks to her, it becomes apparent the crying comes from a tape set up to get Bonita into her role, whereas her real voice is deep and masculine.

The actress tells Raz she does not want to be the only light on stage, and so instructs him to go get a candle from the storage room and put it into the mood light. Once Razputin has done so, Bonita goes out on stage, but a shadowy figure soon thwarts the show by dropping a spotlight on one of the actors. Jasper immediately blames Bonita's bad acting, which causes her to retreat to her dressing room yet again.

Rumors had it that the culprit was "The Phantom", a villain who only comes out when Bonita Soleil is on stage, and supposedly lurks in the catwalks above the stage. Razputin immediately wants to investigate, but the only way to get up to the catwalks is by using a hot air balloon used as a prop in a certain play. So, Raz tries out each set, both in 'happy' and 'sad' moods, finding new plays along the way, until finally, he gets to the one with the hot air balloon, allowing him to confront the Phantom.

As he makes his way through the catwalks, the Phantom keeps taunting him throughout such as dropping sandbags on him, but once he reaches the end, the shadowy figure simply waits for him on the other side of a large gap in the path. Raz manages to chase him out of the way by lighting a spotlight nearby, which apparently both blinds and hurts the villainous specter. Looking down on the theater, he sees the Phantom remove his cape and slip into Jasper's seat. Confronting the fat critic, Raz accuses him of being the elusive Phantom, and manages to get a confession by insinuating Jasper would be too fat and pudgy to be the limber, catwalk-climbing villain. Jasper, on the other hand, does not simply come quietly. He angrily states that he really is the Phantom, then reveals his seat to have pen-shaped rifles by the sides and proceeds to attack the psychic kid with bad reviews.

By lighting the spotlights in his face, Razputin beats the angry critic, thus returning peace to the theater and curing Gloria of her terrible mood swings. Everyone watches Bonita's latest performance in awe, and Jasper is reduced to about one-tenth of his original size. 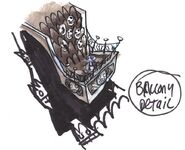 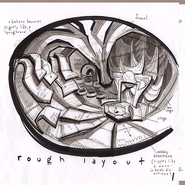 Concept art for the stage. 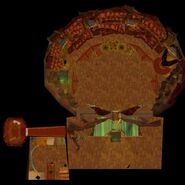 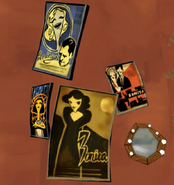 A poster of Bonita.

A poster inside the prop room. 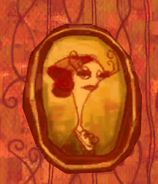 A photograph of an unknown woman, possibly Gloria's mother. 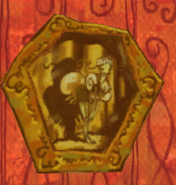 A framed picture of Gloria on stage. 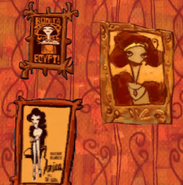 Balcony seats for the audience. 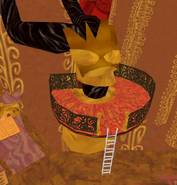 Mural of Jasper Rolls in the catwalks. 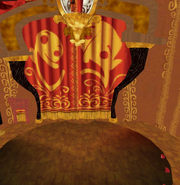 The empty stage.
Add a photo to this gallery
Retrieved from "https://psychonauts.fandom.com/wiki/Gloria%27s_Theater?oldid=29363"
Community content is available under CC-BY-SA unless otherwise noted.