Psychonauts Wiki
Register
Don't have an account?
Sign In
Advertisement
in: Pages with spoilers for Psychonauts, Locations, Non-Mental Areas,
and 2 more

Lair of the Lungfish
Thorney Towers

“Did you ladies know one of the bloodiest battles of the Civil War was fought on the shore of this very lake?”

Note: This article is about the lake itself. To see the Whispering Rock area, see Boathouse and Beach. To see the level of the game that takes place beneath the lake, see Lair of the Lungfish.

Lake Oblongata is a large lake that borders on Whispering Rock Psychic Summer Camp. Thorney Towers Home for the Disturbed lies on an island in the middle of the lake.

It is home to a number of psychically mutated creatures, such as sucker fish and crayfish, and is even rumored to be home to a lake monster.

Admiral Cruller can be found in the boathouse, and campers can take one of his canoes out on the lake once they have been given an Oarsman merit badge. This is necessary to join Milla Vodello's Levitation class on the docks.

Before becoming Lake Oblongata, the area was a small village named Shaky Claim. Due to mass insanity caused by the excessive quantities of Psitanium in the soil, the government had all remaining sane residents evicted and flooded the valley. The ruins at the bottom of the lake, the Lair of the Lungfish, can be explored within an air bubble entered via the bathysphere.

Concept art for trees around camp. 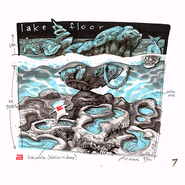 View of Thorney Towers on top of Lake Oblangata.

The lake as seen from Thorney Towers.

The shores of Lake Oblangata.
Community content is available under CC-BY-SA unless otherwise noted.