Lake Monster (nickname given by the campers)

One eye is green and the other is red

Linda, also known as the Hideous Hulking Lungfish of Lake Oblongata, is a heavily mutated lungfish that is rumored to kidnap children in Psychonauts. She is forcefully controlled by Coach Oleander until Razputin frees her from his mind control.

Linda is a mutated Lungfish who's size has been dramatically increased due to modifications made by Dr. Loboto under orders from Coach Oleander. She has two large, glowing, yellow eyes with red and green irises, respectfully. Unlike normal lungfishes, she possesses an angler-fish esca at the tip of a modified dorsal ray which she uses to swing at enemies. It is unclear if this is a modification created by Loboto or a result of the Psitanium poisoning.

She is bipedal and walks on two short, lizard-like legs. She can breathe in water and on land, suggesting she has both lungs and gills. She has a powerful tail used for swimming, reminiscent of a crocodile's. Linda has three rows of razor sharp teeth - two on the top jaw, and one on the bottom jaw, with a noticeable under-bite. Her skin is a scaly muddy brown-blue color withblue-green webbing on her hands. She posses five webbed fingers on each hand and three webbed toes on each foot. Her head is dis-proportionally large to her body, with various bumps and scars formed around the skull as results from the artificial mutations. Metal plates are also implanted on her skin. She has multiple dorsal fins protruding from her head, spine, and tail.

She is extremely aggressive while under Oleander's control. Once his mind-control devices are removed from Linda, her demeanor changes to one of a gentle giant. She can be summoned by Raz for transportation across Lake Oblongata.

“Once a peaceful, average size, walking fish, the Lungfish has been mutated, enlarged and mentally controlled by evil forces. Now, according to legend, it comes out of the lake at night to eat the brains of unsuspecting children. This is only partly true.”

Linda was initially a regular lungfish living underneath a dry lake bed before being taken and altered by Dr. Loboto and Coach Oleander. After hideously mutating her and putting a mind-control implant in her brain, Oleander used her to kidnap the children from the camp, bringing them to Thorney Towers Home for the Disturbed across the lake. She is first mentioned in the opening cinematic by Bobby Zilch, who had been spreading the rumor that there was a monster in Lake Oblongata. Mikhail is the second to mention her, mistaking her for a "giant hairless bear" that he expresses interest in wrestling. She makes her first appearance during the "Lili Kidnapped!" cutscene, where she attempts to lure Lili and Raz with random objects while they converse. The last object she throws out is a flower with a happy face, which Lili picks up without thinking, giving Linda the chance to reel her in and kidnap her. After destroying the mind-control implant in her brain, Linda is very grateful to Razputin, offering him a way to the Asylum across the lake where Lili and the other children's brains are being held.

On the MTV2 shorts which take place after the game is completed, Linda is shown playfully interacting with the Campers around Whispering Rock.

Linda's mind is a sprawling metropolis reminiscent of Tokyo, inhabited by Lungfish people living out a human-like existence. When Raz enters her mind, he is gigantic and feared by the citizens as "Goggalor". However, the Lungfish citizens within the resistance movement against Kochamara aid Raz in taking down the radio tower (mind-control implant). The entire scenario parodies the Godzilla franchise and the Kaiju film genre in general, casting Razputin as the monster because Lungfish are more commonly preyed upon by humans.

The first battle with Linda takes place in an air pocket under Lake Oblongata. The best way to beat this part is smashing open the boxes of nails lying around as she sucks them in. Repeating this will move the battle to phase two, where Raz has to be steered through the lake bottom while Linda pushes the air pocket around. Keeping ahead and not getting too close to the edge of the bubble are key, as Raz will be grabbed out of the bubble by the Hand of Galochio if he touches the edge. After surviving the obstacle course the final part of the battle will ensue, in which Linda will come out and fight you herself. She attacks with her "fishing rod" appendage at close range, and needs to be led to one of the many clam shells while doing this attack. Her fishing rod will get stuck in a clam if it done correctly, leaving her open to attack. After the battle, the player will be able to use the Psycho-Portal on her, and continue to Lungfishopolis. 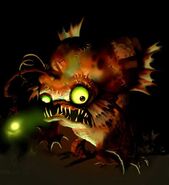 Linda concept art.
Add a photo to this gallery 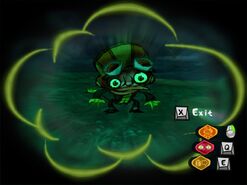 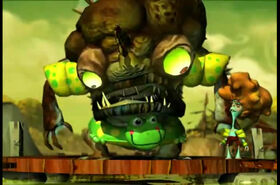 Bobby and Linda from the MTV2 shorts.

Linda and Raz.
Add a photo to this gallery

Figment of Linda in the main menu in Rhombus of Ruin.
Add a photo to this gallery 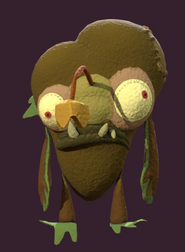 Front view of the Linda plush. 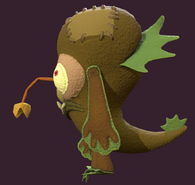 Side view of the Linda plush. 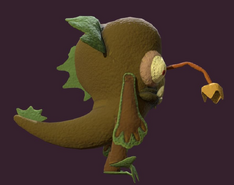 Second side view of the Linda plush. 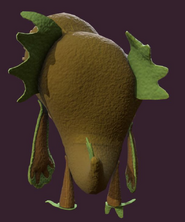 Back view of the Linda plush. 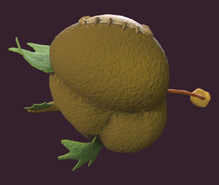 Top view of the Linda plush. 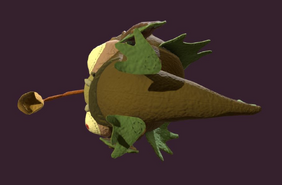 Bottom view of the Linda plush. 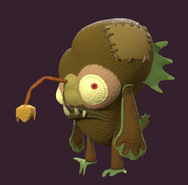 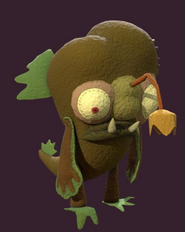 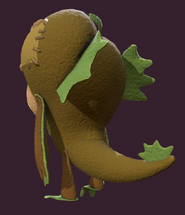 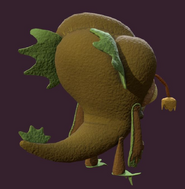 Psychonauts - Tábortűz (MTV2 Sharts)
Add a photo to this gallery

Retrieved from "https://psychonauts.fandom.com/wiki/Linda?oldid=29365"
Community content is available under CC-BY-SA unless otherwise noted.