“Our noble, all-volunteer navy has been surprised only by the senseless lust for mayhem that seeps from the twisted, black lump of a heart in this creature, still known only as Goggalor.”

Lungfishopolis is the mental world of Linda in Psychonauts. It is a huge metropolis surrounded by a large lake.

The level starts as a gigantic Razputin finds himself in the middle of a bustling metropolis inhabited by the lungfish citizens. As Raz makes his way through the city, he is spotted by a freedom fighter lungfish, who Raz accidentally kills with his loud voice. Another lungfish comes along and informs Raz about the broadcast tower emitting a mind controlling frequency that has taken over the city. He instructs Raz to free his comrades from prison to help Raz reach the tower to destroy it.

During Raz's trip to the tower, the lungfish military attempt to destroy him, but to no avail. The lungfish media nicknames Raz "Goggalor". When Raz reaches the broadcasting tower he must fight Kochamara, a mental figure resembling Coach Oleander. After Raz strikes him down, he climbs to the top of the tower. Upon reaching the top, Kochamara reappears and dives at Raz. Raz jumps out of the way and Kochamara accidentally destroys the tower. Kochamara then disappears in a rage and all of the freed lungfish citizens cheer for Goggalor.

Make your way through the city to the prison. Use your shield to rebound the electricity generated by the forcefield inside the tunnel to destroy the defenses. Enter the camp and proceed to smash the jail. Leave the ruins and travel to the dam, and then jump on the blimp to reach the top.

Continue traveling until you reach the bomber planes. Climb the skyscrapers and use PSI-blast to shoot down the airplanes so the freighters can dock. Once the freighters are docked, jump across them to reach skyscraper island to battle Kocharama.

Kochamara begins the battle flying. He will only perform two attacks at the start: Mighty Ram (where he charges into Raz from the sky) or Deadly Triangle Beam (where he fires an energy beam at Raz). When he uses Deadly Triangle Beam, use Shield to deflect the beam back. After three hits, he will sap all your Aggression Ammo and land on the ground. Now, he has three additional attacks: Mighty Ram Ground Version (he charges at you), Overly Intricate Combination Attack (he does a combination of kicks and punches), and Hard-to-Avoid Area Attack (he charges up and blasts the entire area). When he uses Hard-to-Avoid Area Attack, use Shield to defend yourself and then run up and hit him while he's stunned. Eventually, he'll start flying again. Repeat the flying phase until he is hit once, then the ground phase until he is hit twice. Once Kochamara is defeated, climb the tower to trigger the final cutscene.

There is a glitch in Lungfishopolis that allows the player to return to the camp and the asylum after the Point of No Return (PONR), even during Meat Circus. Normally once you've reached the PONR, you cannot revisit the real world to collect remaining challenge markers, scavenger hunt items, or anything left behind. The glitch still works on the PC version as of 2020.

While in the Meat Circus, use the smelling salts to return to the Collective Unconscious and enter Lungfishopolis. Go to the towers where the airplanes used to circulate and where the freighters were docked. Climb the farther tower on the island, the tower closest to where the boats used to be docked. Turn to face Kochamara tower and jump off the skyscraper. Double jump to reach the island and PSI-Blast button continuously to launch yourself forward. Continue forward after the water arm has grabbed you and land on the island. This will likely take several attempts.

Once you reach the island, climb the tower to exit the level. The final cutscene in Lungfishopolis will play, however it is skip-able. After the cutscene, Raz will be returned to the Asylum gates and can use the Lungfish call to return to Whispering Rock. 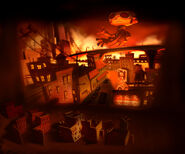 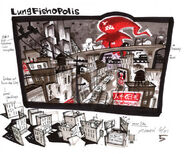 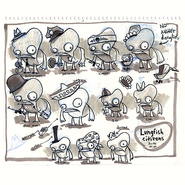 Concept art of the Lungfish Citizens.

Graveyard concept art for Lungfishopolis.
Add a photo to this gallery 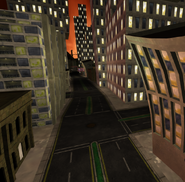 A view of the horizon, with Kochamara Tower in the distance
Add a photo to this gallery
Retrieved from "https://psychonauts.fandom.com/wiki/Lungfishopolis?oldid=29424"
Community content is available under CC-BY-SA unless otherwise noted.