Psychonauts Wiki
Register
Don't have an account?
Sign In
Advertisement
in: Pages with spoilers for Psychonauts, Locations, Non-Mental Areas,
and 2 more

There is also lots of space outside for a young camper to explore, laced with bridges to cross and poles to climb and dubloons to dig up, but the odds are you’ll be too busy haranguing Ford for free vittles (in vain, I might add) to notice. So relax, and let the soothing sounds of feuding, prepubescent band members, an old man trying to cook, brainless kids muttering, Vernon droning, and something playing on TV take you away from your problems. There’s always a seat waiting in the lounge upstairs, and the burgers will be ready someday. You could go outside and try to save the world, I guess, but there’s a brain stealing fish out there and that’s scary.

The Lodge is at the heart of the camp, and lies between the Reception Area, Lake Oblongata, and the GPC and Wilderness. Chef Cruller is the split personality in this area.

With a certain amount of acrobatic skill, a nimble player can explore the roof of the building, with several loudspeakers connected via a series of tightropes. Hitting the loudspeakers will result in a message warning against vandalism.

Crystal and Clem apparently gather on the roof to talk about "the project", a plan of theirs which may have involved committing suicide together. After completing Levitation, Chloe can be seen on the roof trying to extend the antenna's reach in order to send a message across space.

At night, Elka and Nils are standing where Kitty and Franke were at during the day holding hands and looking at the sky.

Within the lodge itself, the player can purchase items from Chef Ford Cruller at the camp store on the right. The player must come here and purchase a PSI Core to make a new PSI Challenge Marker. Also for sale are Dream Fluffs and a Cobweb Duster.

After the vision of Loboto in the Brain Tumbler Experiment, Dogen can be found here brainlessly watching television. Later still, Kitty and Franke are also sitting here debrained, accompanied by a perfectly healthy Vernon keeping them entertained with a story about the Civil War. 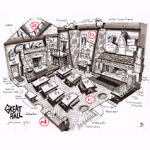 The main lodge from the Psychonauts early prototype.

The main lodge from the Psychonauts early prototype.

The Camp Store located inside the lodge.

Inside the main Lodge.

Raz in the tv room.

Raz sliding on a handrail in the main lodge.

Inside the Main Lodge.

Purchasing from the Camp Store.

Outside the Main Lodge at night.

A cartoon on the television.

Closeup of the television cartoon.

Some notes pinned on bulletin board on the Main Lodge.

A poster of a snake surrounding Zener cards. These cards are used by parapsychologists to try and determine if someone can use ESP or Clairvoyance.

A poster referencing a Read poster by LL Cool J.

A pencil drawing of two campers. One is using telekinesis to levitate a heart.

A drawing made by a camper levitating an apple from a tree.

A poster of Sasha titled "READ".

Poster from the tv room.

A painting of a cowboy riding a horse lassoing a brain.

Crayon drawing made by a camper. They appear to be fighting a monster.

A guide to palm reading.

A dream fluff advertisement board.

Second piece of the dream fluff advertisement board.

Inside the Main Lodge.

A table with napkins, cups, and silverware under a poster of Milla.

A toy tuck and a plant named "Chuck" sitting on top of a bookshelf in the tv room.

Outside view of the interior model for the lodge. The textures viewed here are actually the inside walls' textures. A separate model is used for the exterior of the lodge viewed from the camp.

Another plant named "Chuck" next to a clock in front of several posters on the wall.

Various items on a shelf.

Beanbags in the tv room. The DoubleFine carpet can be seen undernearth.

Back view of the lodge.

Outside view of the lodge.