Psychonauts Wiki
Register
Don't have an account?
Sign In
Advertisement
in: Pages with spoilers for Psychonauts, Items, Collectibles,
and 3 more

“When you let certain things sit in your mind, and do not think about them, the result is the same as in the real world. Cobwebs form, but mental cobwebs are much tougher and to get through them you need a Cobweb Duster.”

Mental Cobwebs are bright-purple colored cobwebs found in mental worlds that can only be removed using a Cobweb Duster. They form when an area of the mind isn't used for prolonged periods of time. Those with severe mental issues can have cobwebs so big that they block off larger portions of their mind and must be cleared to continue the level. Their counterpart in Psychonauts 2 are barriers.

The first cobweb is encountered in Basic Braining, where Coach Oleander tells Raz to steer clear of them at the moment, as they cannot be removed without a Cobweb Duster, an item available for purchase at the Camp Store. Once a Mental Cobweb has been extracted, Raz can travel to Ford's Sanctuary and use the loom to weave the web into a PSI-Card. The cobwebs that have been extracted will not return to its original location. Cobwebs block player progression from the Milkman Conspiracy onward, thus requiring Razputin to purchase the Cobweb Duster. There a total of 48 mental cobwebs in Psychonauts.

Texture sheet for the mental cobweb.

A mental cobweb in The Milkman Conspiracy.

A Mental Cobweb in Basic Braining. 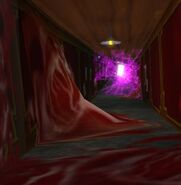 A cobweb in the Meat Circus.
Community content is available under CC-BY-SA unless otherwise noted.
Advertisement