Mikhail Bulgakov is a camper at Whispering Rock Psychic Summer Camp. He is fixated on wrestling bears, specifically a "large hairless bear" he has seen around camp. He is Maloof's bodyguard and has been known to tell campers exactly how he could beat them in a fight. He calls his Telekinesis move the "Telekiliminator".

He is voiced by Mark Ivanir.

Before embarking into Basic Braining, Mikhail can be seen standing near the path to the Main Campgrounds. He mentions looking for a "giant hairless bear" that he thinks lurks in the forest and spends his time searching for the elusive creature for a while.

If Razputin goes to the parking lot after completing Milla's Dance Party, he'll find Maloof with a pair of underpants containing a fish pulled over his head. He is waiting for his father to come pick him up, sick of being constantly bullied by Bobby Zilch. Mikhail joins them, thinking the fish is a strategy to attract the bear for wrestling, and tells Raz he'll stay with Maloof so he can wrestle the bear himself afterwards. Maloof tells Mikhail he can have his turn, as he is completely uninterested in wrestling. Mikhail is so thankful for this that when Bobby appears to cause more havoc, he uses Telekinesis to hold the bully into the air, stating "Bullying now forbidden" and threatening to use a fighting technique called the "Deadly Nelson", which, according to him, would cause the eyeballs to pop out of the victim's head. This scares Bobby away from bullying Maloof, at least for the remainder of the game.

From that point on, Mikhail acts as Maloof's bodyguard, being seen warding off any threats to his 'little boss' (including Raz). Mikhail doesn't have a reason why he started working for Maloof, nor does he know that Maloof has nothing to give in return except bullies to beat up. Mikhail doesn't charge Maloof for his services because he thinks his "boss" should be charging him. They are also later seen holding Benny over the creek near the GPC, trying to decide Benny's punishment and whether or not to kill him with the Deadly Nelson.

After recovering both Mikhail and Maloof's brains, both can be seen wiring something to Coach Oleander's jeep in the parking lot.

Mikhail's render.
Add a photo to this gallery 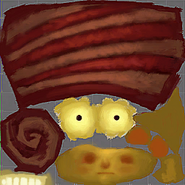 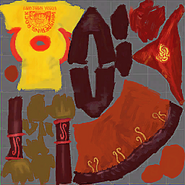 texture sheet of Mikhail's body.
Add a photo to this gallery 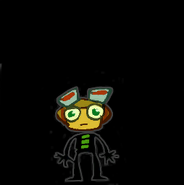 Using clairvoyance on Mikhail
Add a photo to this gallery 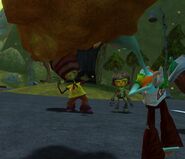 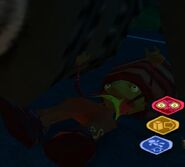 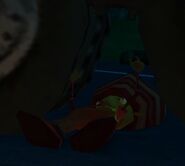 Add a photo to this gallery
Retrieved from "https://psychonauts.fandom.com/wiki/Mikhail_Bulgakov?oldid=28376"
Community content is available under CC-BY-SA unless otherwise noted.