Party Entrance (The Lounge)
Fan Room (The Party)
The Race

“Outstanding! Okay, now, just between you and me, this end of the party is dead. Come find me on the other side of the party and I’ll give you that merit badge for real. Never keep a girl waiting long, young man! (Kiss.)”

Milla's Dance Party is a mental world in Psychonauts which takes place inside the mind of Milla Vodello, the mental minx.

As its name might suggest, this world is basically one enormous party from start to finish. It is equipped with all the necessary obstacles to train campers in Levitation, in a playful manner. Numerous Party Dancers are seen throughout the level, dancing to their hearts' content. Basically, it is like being in a groovy lava lamp.

The level is modeled with a 1970s disco feel and gives off a very upbeat vibe. The Levitation Merit Badge is earned here, and so the world introduces the different aspects of levitation. The mental minx Milla Vodello is with the Campers, the whole time guiding them through various obstacles; in her sweet patent voice, via some very large screens from the other side of the party. The main goal in this level is to find her on that other side of the party and get to dance with her face to face. The Mindscape starts with rolling around on the Levitation ball on different dance floors so that they will light up. Also, there is quite a lot of bouncing from one bright and psychedelic platform to the next. As well as lots of mini dance parties with your fellow PSI Cadets, as one makes their way up the level.

Milla isn't as carefree as she might seem. Hidden within her playfulness is a deep feeling of loss. Milla Vodello apparently used to work in an orphanage, but all of her children died in a fire and she couldn't help them. This is represented by a hidden room, that looks like a children's playroom, which contains a large toy chest. Inside of this toy chest is a room lined with bars, behind which is a horrible, burning landscape populated by the Nightmares of Milla's children, who whisper about how much the fire hurts and ask why Milla didn't save them. The meaning of this room is explained by a Memory Vault, found in the area containing the chest.

The next part of the mindscape resembles being inside a giant lava lamp. This is where we find Milla's other vault filled with all of her adventures with the Psychonauts. There is also an obstacle that shows the mechanic that Levitation allows Raz to pass over dangerous surfaces. The exception being deep water, which is strange according Milla and causes her to show concern for Razputin. There are lot of fans, and bubbles throughout the mental world, which Milla Vodello uses to teach campers how to float up or down with the Levitation ball. Near the end is a long track used for a levitation race against Bobby Zilch, Clem Foote, and Crystal Flowers Snagrash. 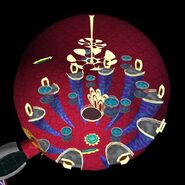 Concept art of the Dance Party. 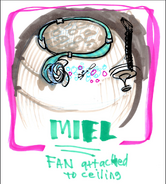 Concept art for the fans

Concept art for the lava lamps

Concept art for the final area of Milla's mind

Raz sliding through the rings.

Raz riding his levitation ball through the race.

Raz next to a large button.

Raz inside the cage.

Outside view of the racetrack. 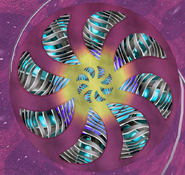 The large fan inside the fan room.

A couch and a table from the lounge area.
Add a photo to this gallery
Retrieved from "https://psychonauts.fandom.com/wiki/Milla%27s_Dance_Party?oldid=27697"
Community content is available under CC-BY-SA unless otherwise noted.