This article features content that will be introduced or featured in Psychonauts 2 announced for release on August 25th, 2021. As such, this may refer to content that may be changed or removed in the to be released version of the game.

“I can burn wood with my mind.”

Psychic powers, or PSI-Powers, are special abilities that can be used by psychics. Examples of psychic abilities are teleportation, mind reading, future vision, and levitation. Most psychic powers need to be taught for the psychic to be able to use them, but some can be present from birth, or self-learned. Psychic abilities can begin to manifest at any stage in a psychic's life. Dormant psychic powers can sometimes be awakened from contact with Psitanium[1] or through periods of intense emotion[2]. Psychic powers are drastically hampered when a psychic comes in proximity to Psilirium.

Most psychics have one or more "specialty" psychic powers they are most comfortable using. Some animals are capable of using psychic powers as well. Some psychics have the ability to enter a person's mind with help from either a psycho portal, a brain tumbler, or in rare cases, physically touching the brain itself.[3] Raz can learn how to use many psychic abilities throughout the Psychonauts series. Most of his psychic abilities are learned with the acquisition of merit badges.

PSI-Punch is the psychic ability to generate a large fist of energy to punch or slap enemies.

Astral Projection is the ability to take one's mental image and insert it into the mind of another to explore their Mental World. Novice psychics require the use of a Psycho-Portal or Brain Tumbler to achieve this, while skilled and powerful psychics can do it naturally.[4]

NOTE: Mental self-images are not true astral projections, such as when Raz meets Coach Oleander, Milla, or Sasha in their respective mental realms.

Raz astral projecting into a mind.

Marksmanship, also known as PSI-Blast, Deadly Triangle Beam, or Blastokinesis, is the ability to release a highly concentrated beam of energy from one's mind to blast away enemies. Most psychics have their own unique Marksmanship color, like green or pink. Marksmanship can be dangerous if uncontrolled[5].

A PSI-Blast shot at Monstroboto.

Telekinesis is the psychic ability to move objects with one's mind. Telekinesis can allow the psychic to lift much heavier objects than they normally could physically, but it does have limits. An example would be Raz can lift a large bomb, but not the entire airplane. Psychics can either manifest a hand conjured out of psychic energy to lift the object or simply lift the object with their mind without use of a psychic hand. Telekinesis can also be used to crush or break bones[6].

Raz using telekinesis to lift a music box without a psychic hand.

Pyrokinesis is the psychic ability to set flammable things on fire with one's mind. It is recommended not to use this power near people who use hairspray. Like marksmanship, pyrokinesis can be especially dangerous if uncontrolled[11].

Raz setting an object on fire using his mind.

Raz using Pyrokinesis to set some wood on fire.

Raz preparing to use Pyrokinesis.

Hydrokinesis is the psychic ability to control the movement of water with one's mind. It is a form of telekinesis. This power can allow the psychic to move puddles or oceans depending on their experience.

A psychic levitating without the use of a levitation ball.

Clairvoyance is the psychic ability to see through the eyes of others. The person perceived through a target's eyes may appear different from their point of view. It can also be used to locate people.

Clairvoyance being used on one of the Party Dancers.

Clairvoyance being used on J.T. Hoofburger.

Zoolingualism is the psychic ability to communicate with animals.

Oly and his pet rabbit.

Shield is the psychic ability to generate a shield of energy around oneself or others for protection. Most psychics have their own unique shield color.

Raz using his shield against a PSI-Blast from Kochamara.

Raz using his shield to defend against a sniper.

Invisibility is the ability to temporarily render oneself invisible. It does not work under infrared vision[20].

Time Bubble is the psychic ability to temporarily slow down time for an object or a person.

Time bubble being used to slow down Monstroboto.

Mind reading is the ability to read someone's mind, with or without their consent. Many psychics are shown to naturally know this ability.

Telepathy is the psychic ability to speak to others using one's thoughts. Many psychics are shown to naturally know this ability.

Teleportation is the psychic ability to instantly move oneself or others through space to a specific destination.

Some psychics have the ability to "curse" others to bring misfortune on them and their descendants. Not much is known about this power other, or how curses can be broken. A notable curse is the Hand of Galochio, created by the Galochios to torture the Aquatos.

Herbaphony is the psychic ability to talk to plants. Herbaphony users can also encourage plants to grow.

Lili talking to a meat plant.

Precognition is the psychic ability to see the future. The power seems to be extremely rare, as the only characters implied to have it are Elka Doom and the Galochios.

The Galochios gathered around a crystal ball.

Necromancy is the psychic ability to communicate to and raise the dead. It is considered taboo by most psychics.

PSI energy transfer is the psychic ability to fully or partially transfer one's psychic energy to another.

Augustus transferring his PSI energy to his son.

Confusion is the psychic ability to temporarily stun or confuse others. It has similar effects to intoxication or nausea, and can incapacitate psychics as well as non-psychics.

One of the G-Men under the effects of Confusion.

Mental Connection is the psychic power to connect disparate ideas in people's minds and allows Raz to pull himself towards floating platforms and enemies. It appears as a grappling hook-like beam. It can have massive negative psychological effects if used incorrectly.[31] Raz learns this ability in Hollis' mind in Psychonauts 2.

Projection is the psychic power to create a 2D archetype of one's self. This ability allows Raz to access areas he otherwise wouldn't be able to, either to pull levers, unlock doors, and/or get otherwise unobtainable items. 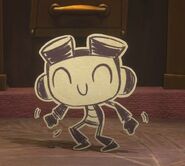 Cryokinesis is the ability to create ice or freeze objects.

Community content is available under CC-BY-SA unless otherwise noted.