A Psycho-Portal is a special device used by Psychonauts in Psychonauts that allows Razputin to enter mental worlds within the minds of different characters. Using the portal puts both the user and the target into a hypnotic trance while the psychonaut's mind is inside the target's mind.

The first Psycho-portal seen in the game is Coach Oleander's, when Raz is pulled into Basic Braining. Later Sasha's and Milla's portals are also seen, at the start of their respective mental worlds.

At the end of the Brain Tumbler Experiment, Sasha leaves the lab in a hurry, mentioning 'official Psychonauts business'. However, he leaves his Psycho-Portal behind, and Razputin pockets it, just in case. Throughout the game, it can be used on multiple characters, allowing entry into their minds. Whilst some minds cannot be entered, using it on these characters will yield some unique dialogue.

Milla's portal
Add a photo to this gallery 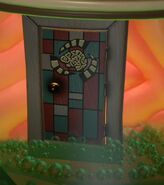 The Psycho Portal in Psychonauts 2.
Add a photo to this gallery
Retrieved from "https://psychonauts.fandom.com/wiki/Psycho-Portal?oldid=21707"
Community content is available under CC-BY-SA unless otherwise noted.