Quentin is the DJ of a band composed of himself and his best friend, Phoebe Love. His primary psychic talent is levitation, and hopes to use levitation tricks to enhance their stage performances. Quentin also harbors a crush on Kitty Bubai.

Quentin has green skin, brown eyes, and auburn hair. He has four fingers on each hand. He wears the standard Whispering Rock camp shirt over a red sweater. He has a striped blue scarf around his neck. He wears thick striped pants and brown shoes.

Quentin has a calm and friendly demeanor, however he can sometimes be seen quarreling with Phoebe, most notably about their band name.

Quentin is first encountered in the Kids' cabins area, arguing over a band name with Phoebe (and ignoring Razputin's proposition of simply calling it 'The Whispering Rockers"). They don't go to Basic Braining, claiming it's dangerous. After Basic Braining, Quentin and Phoebe can be found in the Main Lodge, practicing their music. They return to the Main Loge after re-braining.

A comic by Scott C, Quentin enjoying some coco.

Quentin's render.
Add a photo to this gallery 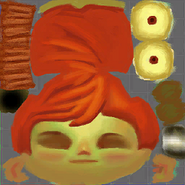 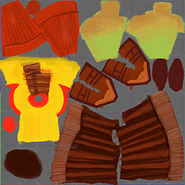 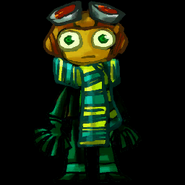 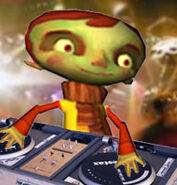 Photo of Quentin found on his Campster page 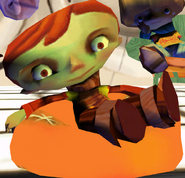 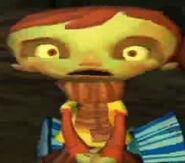 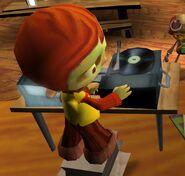 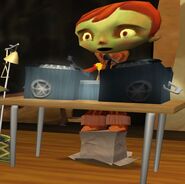 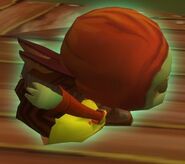 Quentin and Phoebe.
Add a photo to this gallery
Retrieved from "https://psychonauts.fandom.com/wiki/Quentin_Hedgemouse?oldid=29491"
Community content is available under CC-BY-SA unless otherwise noted.