Projection Layer Upgrade
“Ah, problems often seem larger in our heads than they really are. That’s an important lesson to learn.”

Sasha's Shooting Gallery is Sasha Nein's mental world. It serves as a level in Psychonauts.

Sasha Nein's mind is clean and controlled, composed of a dark void with a single white cube, in which everything in his mind is stored. The entire level takes place on this one cube, and Razputin is able to walk on each side as if the cube was a planet. Once the Censors take control, large structures resembling baby furniture spring up around the area. Large shoes, shoe boxes, and fire pyres litter the level. The figments scattered around the area show themes of shoe cobbling and children's toys.

Raz enters Sasha's mind to earn his Marksmanship badge so he can use PSI Blasts. To earn his badge, Sasha shows Raz how to use Marksmanship to destroy the Censors inside his mind. He sets up a lever that Raz can use to increase how many Censors are in the area for target practice, then promptly leaves.

However, Raz accidentally breaks the lever and starts unleashing chaos into Sasha's mind with an overabundance of Censors. Large structures pop out of the cube and two memory vaults are released. The vaults show parts of his memories, such as his apprenticeship to his cobbling father and the memories of his deceased mother. Raz is able to close the Censor holes after several attempts.

Unfortunately, this causes the censors to buildup and merge to form the Mega Censor, a hulking mass of flesh intent on squashing Raz out of Sasha's mind. Sasha pushes Raz out of harms way before the Mega Censor can smash him, taking the hit instead, but gets stuck to the bottom of the stamp in the process. Raz must destroy the Mega Censor by blocking the Censor holes that deploy more Censors that heal the boss. Once the holes are closed, Raz is able to PSI blast the Mega Censor until it finally collapses. Once the Mega Censor is defeated, Agent Nein gives Raz his full Marksmanship badge, on the promise they never discuss the event again.

Upon returning to Sasha's Shooting Gallery via the Brain Tumbler, before Sasha is kidnapped, he explains that the censor leaks were all part of his plan to make Raz a better PSI Cadet. The Mega Censor, however, was the one hiccup he did not plan. Sasha does not appear in his mind after his kidnapping, due to his brain being removed from his body. If Raz returns, the disembodied voice of Nein will ask whats going on. Raz says he'll give him some mental activity by shooting some Censors, which Agent Nein agrees to. 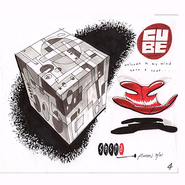 Concept art of the cube. 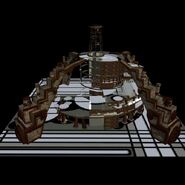 View of the cube.

Raz jumping on a large shoe.

This message will appear once you've hit enough censors
Add a photo to this gallery
Retrieved from "https://psychonauts.fandom.com/wiki/Sasha%27s_Shooting_Gallery?oldid=29147"
Community content is available under CC-BY-SA unless otherwise noted.