“Sometimes, isolation is a good thing. It can lead to important discoveries.”

Sasha Nein is a famous Psychonaut agent. He works with fellow Psychonaut Milla Vodello on many missions. In Psychonauts, he helps at Whispering Rock Psychic Summer Camp, running underground tests of questionable moral status, brought up due to the campers having such negative (and in a few cases, traumatic) experiences.

“World famous super agent, the cold and logical Sasha is constantly striving to uncover the mysteries of the human psyche through science. He is so focused on his studies that he doesn't have the time to realize that he is a celebrity and hero to the thousands of kids that read True Psychic Tales magazine, like Raz.”

Sasha is an intelligent, down to earth scientist interested in studying the full potential of the human mind.

Sasha came from an undisclosed location either in Austria or Germany (Although not confirmed, he has a fairly strong German accent, and he is referred to as "that German fellow" by Ranger Cruller while looking for his underground chamber), working as a shoemaker with his father. Sasha never knew his mother due to her death from an unexplained illness when Sasha was a baby. When Sasha asked his father about his mother, he wouldn't tell Sasha. So when Sasha's powers manifested, he used his telepathy to see his mother's face from his father's memories. This turned out to be a big mistake, as he discovered a naughty memory of his wife, Sasha's mom. Seeing as he was at a young age, this event presumably disturbed Sasha enough to run away from his home.

Sasha's mind is a large white cube drawing inspiration from the sharp, monochrome 1960s brutalism/minimalism aesthetic popular in mid-century German gothic design (as opposed to Milla's 1960's British psychedelic mod leanings). Sasha says that he can manage to keep his mind under control. Hidden inside the cube are various parts of Sasha's mind, each section hinting about his life (like the large bed and crib about his mother and the shoeboxes and tape-measurer about his father), shown when Raz sets the dial that releases the Censors to the highest setting. After fighting the Mega Censor, Sasha gives Raz his Marksmanship badge, telling him that they will never speak of what happened in his mind again. The music in his Shooting Gallery is a remix of Mozart's "Eine Kleine Nachtmusik," which is an indication that he comes from Austria and not Germany. Upon re-entering the mind, it is revealed that the censor leak was in actuality a set-up to train Raz to be a successful marksman.

Sasha works as a camp counselor to the campers at Whispering Rock. He can be found inside his lab after basic braining and before Lili's kidnapping. Once he is captured by Coach Oleander, he is de-brained and kept under surveillance by Dr. Loboto. Once rebrained, he will aid Milla and Raz in breaking Lili's torture chair restraints. He attempts to fight Oleander's Brain Tank, but is overpowered and knocked unconscious alongside Milla and Ford. After the battle, he leaves the camp with the rest of the Whispering Rock Psychonaut crew to rescue Truman Zanotto from the Rhombus of Ruin.

Psychonauts in the Rhombus Of Ruin

Directly after the ending of Psychonauts, Sasha is seen riding on the jet heading to the Rhombus Of Ruin. After crashing and landing in the Rhombus, Sasha is thrown into a hallucination due to the Psylirium deposit beneath him. His hallucination consists of him believing he has met aliens and attempting to communicate with them. Raz frees him from his hallucination by playing a phonograph record of a song his mother used to sing.

Sasha will appear in Psychonauts 2.

Razputin Aquato is Sasha's pupil. Sasha sees Raz as a younger version of himself and hopes to help him on his path to become an experienced Psychonaut.

Coach Oleander is Sasha's colleague. Not much is known about their relationship.

Sheegor is Sasha's lab assistant. Sasha invited her to become his assistant upon noticing her experience with handling human brains.

Not much is known about Sasha's relationship with his mother because of her death during Sasha's infancy. However, she is seen happily playing with him in his memories.

Not much is known about Sasha's relationship with his father. His father appears cold and distant in Sasha's memories.

Milla is Sasha's colleague and love interest. They have gone on exciting adventures together - such as defusing a nuclear bomb, catching criminals, and rescuing the president's brain.

Sasha often invites the campers to train with him in his underground lab using his brain tumbler, however most get scared of the experiments and quickly leave. 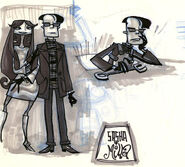 Concept art of Sasha and Milla. 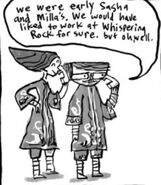 Concept art of Sasha in the UFO in the midquel game by Emily Johnstone. 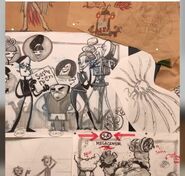 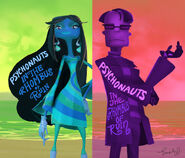 Sasha in an official Doublefine Christmas Card from 2005 by Razmig Mavlian. 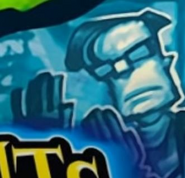 Sasha from the Psychonauts cover art. 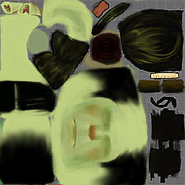 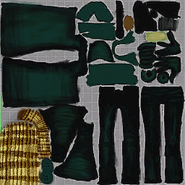 Texture sheet of Sasha's body.
Add a photo to this gallery

Icon of Sasha used on Raz's map of Whispering Rock. 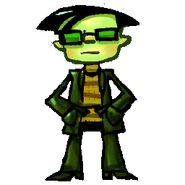 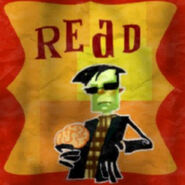 Poster hung in the Main Lodge.

Photograph of Sasha attached to his Jarred Brain.
Add a photo to this gallery 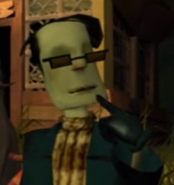 Sasha levitating himself due to a programming bug. Or maybe he's just a bit bored. 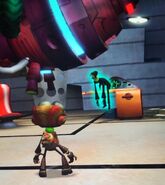 Another picture of Sasha levitating himself.
Add a photo to this gallery 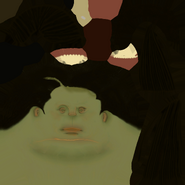 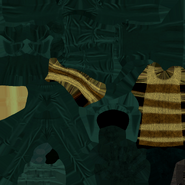 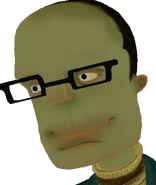 Sasha's model with a view on his eyes. (Also, without some of his hair)

Close view at Sasha's eyes.
Add a photo to this gallery 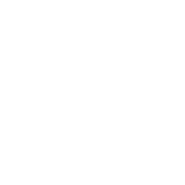 A figment of Sasha, alongside Milla and Raz, in the main menu.

Sasha as he appears in a True Psychic Tales issue, alongside The Noodler and Milla Vodello.
Add a photo to this gallery

Sasha, alongside Milla, in the opening credits.

Sasha, listening to a melody from his childhood, making him happy and nostalgic. 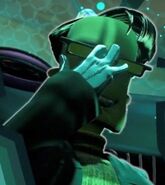 Another picture of Sasha smiling.
Add a photo to this gallery 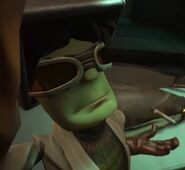 Sasha next to Raz.

Sasha and Raz shown in a Psychonauts 2 update video

Sasha and Raz in a sneak peak video for Psychonauts 2.

Sasha springing into action, from a trailer for Psychonauts 2.
Add a photo to this gallery
Retrieved from "https://psychonauts.fandom.com/wiki/Sasha_Nein?oldid=28802"
Community content is available under CC-BY-SA unless otherwise noted.