Allows the user to move objects with their mind.

Unlocked at level 20 in Psychonauts.

Telekinesis is a psychic power obtained by Razputin Aquato in Psychonauts by obtaining the merit badge at Whispering Rock Psychic Summer Camp.

Razputin learns this when his PSI Cadet rank reaches 20. This skill allows Raz to lift objects and throw them with his mind. When using this, Raz grasps the object with a mental hand, and then throws it in any direction. The Bears use this to attack Raz. It is first required in the Milkman Conspiracy as it is required to fight off the Nightmares that lurk in Boyd Cooper's mind.

In a video for Psychonauts 2 Raz was shown using Telekinesis on Sasha Nein. When used it drained part of a purple HUD gauge, suggesting that psychic energy is required to use the ability. The developers said that he can no longer move NPCs with this ability.

"Hey, I only let my Chiropractor do this. Do you have a licence?"

(Before the Milkman Conspiracy): "Ah! They've come for me! They're taking me away!"

(After the Milkman Conspiracy): "Nothing can distract me from my mission. I will not rest until I've delivered the milk."

Bobby Zilch: "Oh, that was your fatal mistake. I hope you have a will."

Chloe Barge: "Finally! I'm being TAKEN! They've finally come for me! Hey! It's just you. PUT ME DOWN!"

Dogen Boole: "I'm not supposed to get wild at camp!"

Elton Fir: "Okay, I really don't like being up this high."

Franke Athens: "Put me down or Kitty's dad will sue your whole family!"

James "J.T." Hoofburger: "Put me down partner or I'll show you what a good shot I am!"

Kitty Bubai: "Hey, put me down or my dad will sue your whole family!"

Lili Zanotto: "I'm going to be quiet and hope that you just go away."

Maloof Canola: "What are you trying to prove, Raz?"

Mikhail Bulgakov: "Hm. Thanks for the boost. But no, still cant see no bears from up here."

Nils Lutefisk: "Drop me or I will drop you!"

"What the-- ha! That's some mind you got there kid. If you want to keep it, I suggest you put me down."

(Psychonaut Cruller): "Very Nice. Now set me down easy and go pick up something that won't blow up your head if you make it mad."

(Before Waterloo World): "Oh no. Whats this? A secret weapon?"

(During Waterloo World): "Not me. You're supposed to me moving the pieces around."

(Napoleon): "Hey! Don't touch my pieces! That is cheating!"

"Oooh, now I know this isn't supposed to happen."

"Why don't you come in here and do that, tough guy?"

"I was already floating Razputin. That's hardly a challenge."

"I am not short but you should know for future reference that short people do not enjoy being lifted up as if they were children. I am an Emperor! I am King!"

"Let me down or I'll scream for the police!"

(inside his mind) "Enough!"

Effects on characters (Psychonauts: In the Rhombus of Ruin)

"Stop that at once, you bad little boy! It's unnatural!" 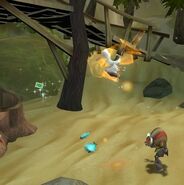 Raz levitating a pelican.
Add a photo to this gallery

Raz levitating the music box.
Add a photo to this gallery

Raz using telekinesis to lift a ram.
Add a photo to this gallery
Retrieved from "https://psychonauts.fandom.com/wiki/Telekinesis?oldid=28926"
Community content is available under CC-BY-SA unless otherwise noted.