Joe Paulino
“How dare you violate the sanctuary of...the Phantom! Stop, or your next step will be your last!”

–The Phantom, when Raz confronts him

The Phantom is the alter-ego of Jasper Rolls who sabotages the plays that Bonita Soleil appears in and goes so far as to try to kill her.

Razputin first encounters him in the catwalks part of Gloria's Theater, where he taunts and attempts to bring about harm to Raz by dropping sandbags on him. Eventually, he is seen but cannot be attacked. Razputin must grab the candle by the ledge, bring that over to a spotlight and use Pyrokinesis on it, causing the Phantom to retreat. 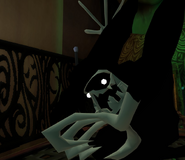 The Phantom recoiling.
Add a photo to this gallery
Retrieved from "https://psychonauts.fandom.com/wiki/The_Phantom?oldid=32268"
Community content is available under CC-BY-SA unless otherwise noted.