Thorney Towers Home for the Disturbed

The Lab of Dr. Loboto

“Well here I am...at the top of an abandoned insane asylum...wearing a straight jacket...talking to myself.”

Thorney Towers Home for the Disturbed is an abandoned insane asylum on an island in Lake Oblongata off the shores of Whispering Rock Psychic Summer Camp. It is the second main setting of Psychonauts.

The asylum was founded in the year 1905 (75 years before Psychonauts)[1] by Houston Thorney, to house the demented people of Shaky Claim, the town currently at the bottom of Lake Oblongata, who were driven mad by the Psitanium under the ground. Within fifteen years' time, however, Thorney Towers was more populated than the town itself. Houston, either driven insane by the Psitanium or by the huge responsibility over the many patients, committed suicide by jumping off of the highest tower. The asylum seems to have been built on a high point above the town, because when the government flooded the town to prevent further settlement, creating Lake Oblongata, the asylum remained standing. It has been abandoned for years, yet some of the residents still remain (even after being paid by the federal government to leave). The asylum was closed in 1925, 55 years before the start of Psychonauts.

Coach Oleander uses Thorney Towers as his base of operations for his plot to take over the world. Dr. Loboto's lab resides in the highest point of the Asylum. The Asylum has fallen into obvious disrepair and is hardly safe to inhabit; filled with rats and crumbling stairways long exposed to the elements. Milla Vodello blocked off the route to the asylum to make sure the kids don't go to such an unsafe place. Even though this asylum is abandoned, it still has inmates and is run by Dr. Loboto. The inmates were unaware that the asylum was closed because they had their own mental problems to deal with. After Raz climbs to the top of the tower and defeats Dr. Loboto, Thorney Towers is destroyed by Boyd Cooper using Molotov milk bottles, the flames of which reached Edgar Teglee's room, which was filled with leaking gas and flammable paint thinners, thus destroying the asylum. It is unknown how the inmates fled the asylum, but it is certain that they managed to get out before the destruction. However, it is unknown if Crispin Whytehead managed to flee the tower in time with the other asylum members. 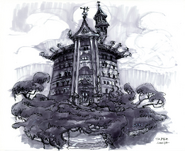 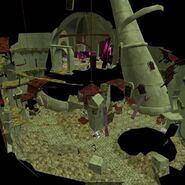 The upper floors of the asylum.

Asylum loading screen.
Add a photo to this gallery

Thorney towers inside Loboto's mind.
Add a photo to this gallery

Retrieved from "https://psychonauts.fandom.com/wiki/Thorney_Towers_Home_for_the_Disturbed?oldid=29205"
Community content is available under CC-BY-SA unless otherwise noted.