Fred vs. Napoleon
Fred vs. Crispin

Golden Ball of Hate
“"All is fair in love and war!"”

Waterloo World is Fred Bonaparte's mental world. It serves as a level in Psychonauts.

The level initially takes place inside a room decorated in 18-19th century fashion (a fireplace, grandfather clock, stuffed bear, globe, etc.) with Fred and Napoleon sitting on opposite ends of a table with the board game on it in the middle of the room. The board game can be entered by shrinking down, leading to an area reminiscent of the French countryside in Napoleonic times. Raz must recruit multiple peasants to help Fred defeat Napoleon and regain his sanity. The board game has hexagonal spaces made to look like different terrain. Approaching key areas on the board will cause Raz to shrink down even further, allowing him to enter buildings and talk to the peasants hiding inside their houses. To return to the overhead view of the board game, Raz can PSI-punch one of the giant champagne corks in the ground and then ride the air bubbles that spout up using levitation. Climbing the ladder on the edge of the board will take Raz back to the main room.

When Raz enters the level, he sees Fred and Napoleon playing a board game called Waterloo-O. As he asks who's winning, it becomes clear Napoleon doesn't think much of his opponent. Fred keeps trying to convince Napoleon to leave, but the stubborn genetic memory of his ancestor resists.

Raz jumps into the game board to see what's going on for himself, leading to Napoleon believing he is Fred's reinforcements. Napoleon explains that the game is incredibly easy: to win the game, all that must be done is to move a knight into your opponent's castle to conquer it. Thinking Fred is finally taking things seriously, he then sends multiple soldiers to stop Fred's progress in the game.

After Raz defeats all of Napoleon's soldiers by recruiting peasants to fight in Fred's army in return for objects they each demanded, Napoleon commands his men to retreat into the castle and raise the drawbridge, even going so far as to jam the drawbridge's gears with an eyedropper. Fred, having regained some spirit through the previous victories, excitedly orders Raz to un-jam the gears. Once that is done, Raz must head into the woods to find Snails and make them into a meal for a hungry knight. He then sends this knight into the castle, finally conquering it and winning the game.

Napoleon is astounded and gives Fred control over his mind again, assuring him that he is destined to share in the many victories of his family name if he holds on to the competitive spirit, and finally disappearing. Raz then exits Fred's mind and gets his straitjacket for his troubles, since Fred no longer needs it.

Concept art of the board's hexagons.

Concept art of the game board itself.

Concept art of the buildings on the board. 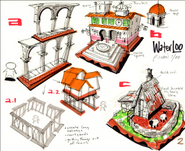 More concept of the buildings in Waterloo 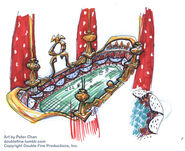 Raz in an old version of Waterloo World. Note Fred is on the board as well.

Raz on the gameboard.

The Snails necessary to recruit the Knight.

The Hearty Knight about to storm the stronghold.

Raz in front of a Peasant's house.

The board game room, as seen through the window.

Group photo of the Waterloo World characters, from the game's credits.

Raz jumping on the sofa in Waterloo World.

Raz in the war room.

A cannon snail in the top right corner.

A cannon snail firing at Raz.

A cannon snail firing at Raz.

The ceiling lamp from the war room.

Raz on the gameboard.

Top view of the gameboard.

Raz in an apple orchard.
Add a photo to this gallery
Retrieved from "https://psychonauts.fandom.com/wiki/Waterloo_World?oldid=34540"
Community content is available under CC-BY-SA unless otherwise noted.