“You were born with a special gift. But the people around you treat it like a curse. Your mother is afraid of you, and your father looks at you with shame in his eyes. Come to Whispering Rock Psychic Summer Camp, and you can show them all. Back home, your powers make you a loner, an outcast, a circus freak. But in this dojo, in this psychic dojo, they make you a hero.”

On the shores of Lake Oblongata in Whispering Valley.

Whispering Rock Psychic Summer Camp is a remote government training facility where children with psychic abilities are trained to become Psychonauts. The camp sits directly above a large Psitanium deposit by the shores of Lake Oblongata, opposite of Thorney Towers Home for the Disturbed. It is the main setting of Psychonauts.

The history of Whispering Rock can be read in the center of the Main Campgrounds' parking lot, where it is inscribed into a large tree-log:

Described by Sasha Nein as a "remote government training facility", the purpose of the camp is to train young psychics to become psychic secret-agents known as Psychonauts. Under the guise of an ordinary summer camp, the agents acting as camp staff engage campers to help them to unlock, understand, explore and advance their psychic powers, as well as provide a safe haven away from the ridicule and suffering that often comes with possession of these abilities.

Whispering rock is run and staffed by agents of the Psychonauts organization.

The camp staff featured in Psychonauts are:

The Campers of Whispering Rock Psychic Summer Camp are children between the ages of seven and thirteen, many from various locations within the US, but also some hailing from Canada, Russia, and in one case, possibly even outer space. Each camper is assigned a Psycadet rank depending on their psychic abilities, and participates in camp activities in order to develop and hone new powers which are represented by Merit Badges. For the vast majority of time, however, the campers are left free to do as they please.

The area around the Main Lodge, seen at night.

Whispering Rock as seen from across the Lake, near the entrance to Thorney Towers.

A private Psychonauts jet departing from the parking lot in the ending of the game.

The entrance to the camp. 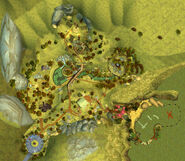 A bird's-eye view of Whispering Rock Psychic Summer Camp.
Add a photo to this gallery 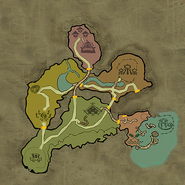 Map of the camp. 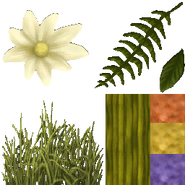 Texture sheet of plants around the camp.
Add a photo to this gallery 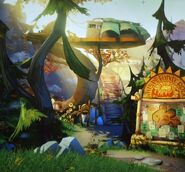 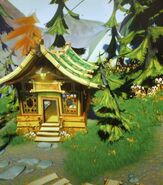 Another render of Whispering Rock in Unreal Engine 4. 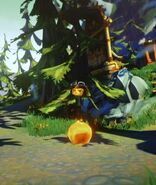 Raz using the levitation ball inside the camp. 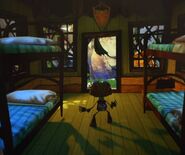 Raz inside the cabins. 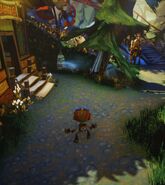 Raz in the camp.
Add a photo to this gallery
Retrieved from "https://psychonauts.fandom.com/wiki/Whispering_Rock_Psychic_Summer_Camp?oldid=28850"
Community content is available under CC-BY-SA unless otherwise noted.